Talking with For Today’s Mattie Montgomery

One of the premiere bands in Christian metal over the last 5 years has been For Today. Last month, the band released Wake to some pretty consistently high reviews. Nathaniel recently talked to lead vocalist Mattie Montgomery during the Wake tour. They talked about the band’s beginnings, the new record, and some various controversies.

Nathaniel: How did you guys start?

Mattie: I joined the band in September 2007. I was in another band in Michigan, really felt like I needed to be out on the road and none of the guys in my band wanted to tour. For Today was about to start touring full time and their vocalist quit. I had heard of them, never met them, but they had heard of me as well. I wrote them a message on MySpace (laughs), tells you how long ago that was, we made a connection, talked a couple times on the phone and then I ended up riding a bus to meet them in Sioux City, Iowa. I was with them only a week before our first tour.

Nathaniel: You guys just came out with a new album, are you guys happy with it?

Nathaniel: What was the inspiration behind this album?

Mattie: This album.. I think more than anything was inspired by our fans. We come to different venues and cities every night and meet people struggling with a lot of the same things. People dealing with suicide or self-harm or addiction or depression or loss.. abandonment, bitterness, unforgiveness. I want to write songs these people can connect to, these are not just issues that one person faces or not just a group of people face, they’re issues that we collectively have to face. We kind of wanted to stand in the corner with these hurting people, broken people, hopeless people and write songs that hopefully people can hold on to when they’re walking through difficult times so that they can find the light at the end of the tunnel.

Nathaniel: What has been the craziest touring experience so far?

Mattie Montgomery (2nd from left) with For Today

Mattie: We’ve had lots of crazy experiences. I’ll tell you one that happened about two days ago. We were in New York City and a girl came to the meet and greet before the show.. so we got to meet and talk with her a bit. She said, “Your music has helped me out a lot, I’ve been a victim of abuse for years growing up, I’ve been dealing with some perpetual issues because of that and your music has given me a lot of strength.” I said to her, “Do you follow Jesus?” She said, “No, I don’t really believe in God or anything, but your music has really inspired me.” I said, ” You know Jesus didn’t do that to you, that was people. The only hope for people who are so perverse and selfish that they would abuse another person to satisfy their desires. The only hope for people like that is the blood of Jesus. It’s the only thing that can turn a sinner into a child of God. I began to share the gospel with this girl and she broke down and began to cry right there at the meet and greet. We talked for a little bit, I prayed for her and right there she ended up giving her life to Jesus.. and forgiving the people that had abused her and let go of that hatred and hurt that was inside. Thankful for the love of God that has set her free.

Nathaniel: What’s your favorite venue to perform at?

Mattie: That’s hard man. More than a venue, it really depends on the crowd. We really love the Glass House that’s in Pomona that’s always a great one, the Warehouse Live in Houston is always incredible.. even on this tour we played on Greene Street in Greensboro, North Carolina that is always awesome. There’s a lot of great venues around, but I think the thing that really sells it is the crowd. Every tour we do it seems like the crowds are different, the energy in the room is different so I don’t know if I could pick just one. 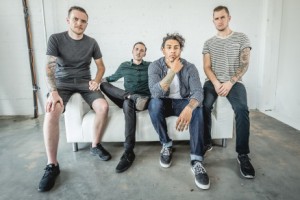 Nathaniel: You guys have been through a lot as a band recently over the past couple over years. I know you guys toured with As I Lay Dying before the whole thing happened with Tim and then the most recent thing that happened right before summer with your guitarist, how have you guys come along since that stuff and how have you dealt with it as a band?

Mattie: I don’t know if there was really ever a “thing” that we did to deal with these situations. We’ve got a job to do, we’ve got to play music for the glory of God. There are things that will come up or opinions that will be brought to light or whatever that will try to derail that, but there’s only one thing and that’s to honor the call of God on our lives and that’s it. I don’t know that we have any strategy or went through any process to deal with anything, we’ve just kept our eyes on Christ and that’s it.

Nathaniel: I’ve seen you guys a few times before and I know that you preach during the concerts a lot, what is your inspiration behind that?

Mattie: I don’t know if I’d say there is an inspiration, I just want to tell people about Jesus. I share the gospel in airports, in restaurants, in gas stations too. So if I’m on stage in front of a group of people I’m going to be the same guy there that I am everywhere else and that is sharing the good news of Jesus… I don’t want to miss an opportunity to be a part of the story of what God did in someone’s life. I’m really thankful for that opportunity.

Nathaniel: What artist have you been listening to lately?

Nathaniel; Thank you for your time.