One of the longest tenured bands in Christian metal is War of Ages. Over a year ago, War of Ages released their 6th full length album on Facedown Records. My brother Nathaniel talked with lead vocalist Leroy Hamp about the band’s longevity, touring with Underoath, and future plans for music.

Nathaniel: You guys have been around for awhile, what do you feel is the key to your longevity?

Leroy: I would say adapting. We’ve learned to adapt to any situation whether that be financial, demographic or music in general. We’ve learned to adapt to whatever is going on around us. Another key to us being sane on the road is keeping each other accountable and keeping close ties to home as well, which is where we get our footing and foundation.. all three of those play a huge significant role in our legacy.

Nathaniel: Where is home for you guys?

Leroy: It’s different for all of us. I, myself am from Dayton, Ohio. My brother, the drummer, lives in Dallas, Texas. Jack lives in Cape Girardeau, Missouri. Steve lives in Eerie, Pennsylvania, which is where the band is from.

Nathaniel: You guys are from all over the place!

Leroy: Yeah! That’s what happens.. that is where the whole adapting thing comes into play. It’d be awesome if all of us lived in the same area and every musician was from that area, but as time goes on your pool gets smaller.. especially depending on what kind of band you are, people grow up, people move on and they realize they don’t want to be in a band anymore.. or you don’t have somebody in your area that fits the criteria.. or you get married, have kids and move (laughs). 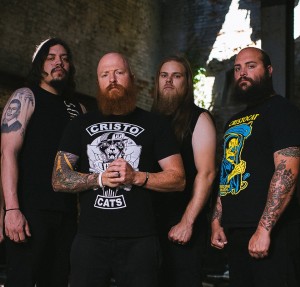 Nathaniel: Being from all over the place how did you guys meet?

Leroy: Steve and I worked at Wal-Mart together back in 2002.. maybe? He and I initially started the band. My brother came in very shortly after that.. and I’ve known him my whole life (laughs). Jack, actually played with another band we toured with a long time ago.. it was another Facedown Records band, called Hope for the Dying. We became really good friends with him.. he still wanted to tour, he still wanted to be active and he is a heck of a guitar player so we grabbed him.

Nathaniel: How do you guys keep your faith and continue to live a life glorifying to God living in the heavy-metal environment?

Leroy: It’s definitely a hard thing to do. Like I was talking about before.. keeping those roots solid, keeping each other accountable, because things happen on the road.. none of us are perfect. I wish I could say we were perfect, but what’s awesome about that is God doesn’t ask us to be perfect, He just asks us to be obedient. The one thing about obedience is that it cannot be learned, it cannot be taught, it’s a choice. With that being said, we choose to say you’re stronger, we choose to hold each other accountable and try to keep that integrity alive in the band. That’s the biggest key, is staying true to who you are.. because we meet people from all walks of life and we minister to people that are drug addicts or use to be drug addicts, fellow Christians or people that fell away from faith. We cater to all those different flocks and walks of life. We try to stay as Christ-centered as possible and that’s building these relationships. I’ve always said I think people who picket are interesting.. I feel like everybody has their place or their movement.. whatever they’re doing.. I’ve always felt like Christ wants us to build relationships. I can stand on a street-corner and hold up a sign that says whatever I got to say on it or I can go and build a relationship with those people.. try them to get know me and I to know them and maybe make a difference with one person’s life and then they can go off and maker a bigger difference in these people’s lives than I ever could make. That’s the philosophy we have. That’s how I was reached.. somebody made a relationship with me and changed my life and I went off and started War of Ages.

Nathaniel: How do you guys respond to suggestions that the majority of members in Christian metal bands are not Christian? I know that doesn’t happen a lot in other genres of Christian music.

Leroy: I don’t really have an answer for that question. It’s a hard one. Unless someone deliberately picks someone out then you could say that’s true. It’s a personal choice, if someone is riding the curtails of money then that’s their prerogative.  At the end of the day truth seeks you out. I could call out this person or that person, but is that really building relationship?  Not that I don’t hold each other accountable, that’s not what I am talking about. That’s building relationship with someone you’re going to influence. I don’t need to protect God. I don’t need to protect Christ. If I believe He is the all-powerful I Am, then why does he need my protection? (laughs).. Saying it sounds stupid. To me some people believe that Christian bands aren’t Christians and are doing more harm than good.. well okay, get to know these bands you think that about and maybe they’ll get to know you and you’ll feel differently or maybe you’ll find it’s true. I can name you many bands that were Christian bands that that has happened to. When Underoath announced back in the day.. a couple years ago that they were no longer Christians or As I Lay Dying and that whole situation. I don’t need to be a forerunner and let you know how bad these people are because some day I will fail someone and then I will be looped-in in their eyes in to that category because.. I am not perfect by any means. I’ll stick to building relationships and reaching one person at a time, I’ll let other people worry about masses.

Nathaniel: Speaking of Underoath, what do you think about them getting back together? Have you guys ever toured with them?

Leroy: Yeah! We toured with them on the Cool Tour. We loved them, they were really, really nice people. As far as them coming back, I really like their They’re Only Chasing Safety album so as long as they go back to a similar style as that I’m totally cool. I don’t know where they stand now. I know they have all original members, I guess in time we’ll find out how they are sitting with their beliefs.

Nathaniel: You also mentioned As I Lay Dying, I know you guys were well connected with them and have been through a lot with that. How has that challenged you?

Leroy: Really well actually, because that’s definitely their situation. We’ve tried to be there as best as we could.. myself and my brother for Tim. We spoke with him consistently over that whole situation. He’s doing a lot better mentally.. other then what had happened he hasn’t really fell off the deep end since then. It’s a challenge though.. there is a lot of stuff going on with him, a lot of personal things, a lot of things that were instilled into him. Even though you look at a symbol like that.. a person who has been pretty much handed everything and you think everything is great for them.. that’s not true at all otherwise actors wouldn’t dive into drugs, people wouldn’t try to kill their wives. It’s not a perfect world even though you think it is.. you think money will bring you happiness, but at the end of the day there is still that struggle, that fight that you have that you need to be equipped with.. and if you don’t learn how to deal with frustration and situations  and when you meet a battle head on you have to learn to deviate, you have to learn discernment. With my wife and my situation not every day is great.. it’s an awesome marriage, I love my wife  and she loves me and we love our kids, but marriage is hard, it’s a battle. You don’t always wake up every morning thinking that situation is the best situation, you always want to strive for something better. Whenever you become platonic.. or you feel like your situation is safe that’s dangerous place to be in. You should always be fighting for each other and fighting to insure your relationship and to grow as believers and let your marriage flourish. That goes with life in general.. you have to learn how to be held accountable for situations that happen. When you fail and when you fall you have to learn to get back up. I don’t want to sound like a after school special, but that’s life.. maybe those after school specials should come back (laughs).  Life isn’t easy. Making the choice everyday to fight for something bigger than yourself when society is literally molded and designed for you to think of yourself.. for you to think of what’s best for you.

Nathaniel: You guys toured in China a couple months back, how challenging was that for your faith? Was it scary to be in a closed area?

Leroy: In a way yeah it was at first.. we didn’t know what to expect. As Americans we hear about the communism over there.. you always hear that about every country, about how much worse it is from where you live currently. You go there with all those preconceived notions, especially with a place like China.. you hear horror stories, government control  and all of that stuff. We walked into there and it was awesome. The one thing I did notice, the people, the culture is one that has had God completely removed and people that do have church over there have to do it secretly.. in order to start a church you have to send your papers about what you’re going to be teaching into the government and the government will let you know the standards. They are controlling to a point, but it’s not as bad as what you’d think, but with church it is because they see that as something that could definitely infiltrate society for them. With that being said, when you take God out of an equation you start to see the narcissism, a narcissistic attitude that comes out over there.. me, me, me, myself, I have to get here now and you’re in my way. It is very much like that. Although we were American and everybody was like, “Woah! Look at these people, they’re different than us!”.. that happened quite a bit. You could see it with them towards each other. It’s very different as far as culturally.

Leroy: No tour announcements, we are actually working on an album as we speak . We are in the writing process, trying to put things together and write the album.  We are going to enter the studio probably at the end of January and February.

This entry was posted in art, Christianity, metal, Music and tagged underoath, war of ages. Bookmark the permalink.