My brothers Josiah and Nathaniel did a few interviews for us at Creation festival East this year. They talked to Children 18:3’s David Hostetter about the band’s beginnings, it’s rumored ending, and the band’s relationship with Tooth & Nail

Nathaniel: How did you guys all meet and start?

David: Well, we started in the summer of 1999. My brother and I and some friends played together in local talent shows. And this other guy wanted to play with us. So I said, “Ok, I guess we’re a band.” So there was actually 5 original members. And then over the first year or two, most of them moved onto different things. And then our sister joined around 2003.

Josiah: Is that a challenge to play with siblings? Does it ever get heated?

David: Anytime you get more than one person trying to do something in unison together, you always have exponential creativity and potential for success. But there’s also the challenges that you have to work through. I think that goes with any group of people whether you’re related or not. The trick is: How do you work through the issues? We had some great parents that taught us well.

Josiah: Good parents are definitely a good thing to have.

Josiah: You just released Come In a few months ago. Tell us a little bit about that.

David: Yeah! Our contract was up with Tooth & Nail and they decided not to do the last option. So we decided to do a Kickstarter campaign for our 4th record. We did that about a 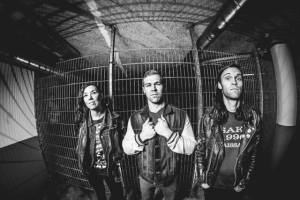 year or so ago. We went down to Nashville and recorded the record. And then Tooth & Nail decided that they wanted to be involved and help us out. So we licensed the record through them. And then it came out about a month or two ago. It’s called Come In and it’s on Tooth & Nail records.

Josiah: The rumor is that you guys said this is your last album. Is that true?

David: You know about a year or go, we decided that we were going to commit to doing some change to something. Over the last year with making the record, it’s become less clear what that change is going to look like. All the options are still on the table for Children 18:3. All the irons are still in the fire. All the cards are still up our sleeves.

Josiah: Just recently, former labelmate Icon For Hire had a pretty messy public breakup with Tooth & Nail. They’re doing their own thing now. How’s it been for you working for Tooth & Nail? Did you experience any problems with them?

David: We’ve always loved Tooth & Nail! They never kept us on any sort of a leash. I think they just got a kick out of our band and enjoyed us! They pretty much let us do whatever we wanted. We always had fun hanging out with the people there. And it was great to partner with them for this record!

Josiah: Is it hard not to get jaded by the business side of music? On stage, I can tell you guys are having fun. But behind the scenes, do you ever have any frustration with how the music business is? Especially since you guys aren’t the cookie-cutter-type band…

David: Often, people in bands are not really business minded. So that whole world is just really hard to fathom. And that’s probably different for different bands. I’m sure there are bands that do have more business minded people… But I do think that has been the

challenge for hundreds of years: How do you make art relatable to the masses? I think it’s a constant wrestling match. And I definitely don’t have it figured out at all. That’s one of the things that I pray and ask for grace for…for help for the business side of the band, having clear vision and goals. You know the Holy Spirit is strong in any areas where we are weak.

Josiah: Like I said, I’ve seen you live many times. You guys put on an excellent show. How important is that to you as a band to put out a good product like that?

David: We used to all live in the same home. So we were able to do a lot of rehearsing. I think that is the base of our live show and performance in general. Over the last couple of years, we’ve all lived in different places. So it’s been a little bit harder to rehearse as much. I think that’s a key thing. And over the years, learning different things about what works and what doesn’t. When you’re doing a show, the most important thing is being able to connect with your audience. You want to make sure they get involved with you and have fun. Because if the audience has fun, that’s the best for everyone. Then they’ll like your band more and are more likely to buy your product. And you’ll have more fun performing if you know that they’re having fun. It’s a coming-together and a mutual thing.

Josiah: Ok, this is a question of my own. I’ve been to one of your shows where you had a technical difficulty. You sang the “circus song“. Is that ever going to make it to a recording?

David: Like I said, all irons are still in the fire. All options are still on the table. We’ll see what the future holds!

Josiah: Gosh, I love that song.

David: Thank you very much!

Josiah: Thanks for your time!

Podcaster with a random Bachelor's degree in History (yes I'm a nerd). I'm passionate about music and social justice. Follow me on Twitter: The_GabeJones
View all posts by Gabriel Jones →
This entry was posted in art, Christianity, Music, rock and tagged children 18:3, icon for hire, tooth and nail. Bookmark the permalink.