Has it really been 20 years? Thats what they tell me. DC Talk’s penultimate album, (and I hope I am wrong about that but as things stand thats what it is) Jesus Freak, released to the masses and forever changed the landscape of what was accepted in the Christian music industry and how outsiders viewed Christian artists. Here at Decent Christian Talk we will be looking at various songs off of this album over the remainder of this year and discussing their impact on culture, Christianity and music.

1,1,1,1,2,2,2,2,3,3,3,3,4,4,4,4….
The 90s will have to go down as one of the oddest time periods to have been alive. Music was all over the board. Hair bands, Glam Rock, Grunge, Alternative, Metal, Industrial, Techno, Punk, Pop- Punk, Swing, Ska, Boy Bands, Rap-Rock, Gangsta Rap, Hip-hop, Soul, R&B, Disco, The tail end of New Wave, another British invasion… If you wanted it in the 90s, it was available to you. And if you wanted all of that in one band you could listen to DC Talk. Okay, maybe not all of it, but definitely more than a few of those genres were present on a DC Talk album.

But beyond the music there were major cultural shifts occurring. In 1992, the LA Riots were sparked by the acquittal of officers in the beating of Rodney King. Race was once again at the forefront of the conversation. People were engaged in the debate and we were 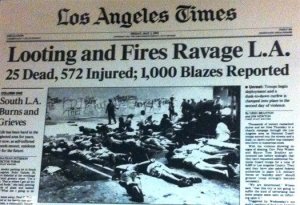 more connected than ever before. News cycles were becoming more accessible and the frequency with which we received the news was nonstop. But there were other sources that were influencing how we interpreted this news. Music.

Bands were able to turn out songs about current events at a much faster pace and get them to the masses. MTV was filtering the discussion down to teenagers who otherwise would have had no clue what was going on. Young people (like myself) were staying up to watch Yo! MTV Raps! We weren’t just hearing it from Tom Brokaw, we were hearing it from Arsenio Hall. We were hearing about it from NWA, Ice-T and solo efforts by Eazy-E and many others. It was a language that was new and enticing because of how edgy it was. Kids from rural areas were listening to rap and hearing about things they had no familiarity with. Some of that was good and some not as much. These albums carried explicit lyrics warnings that only made us want to buy them even more. But it opened up an entire generation to the influence of rap. It wasn’t just gangsta rap that we were hearing. We were listening to A Tribe Called Quest, Arrested Development, and many others who were talking about social injustice and inequality and it made us aware of issues. Everyone was talking about it, except the church.

The church for whatever reason remained silent. All around us tensions were running high. People were hurting and being treated like second class citizens yet the church remained ominously silent. This was not always the case. It was the church that led anti-slavery movements of the late 1800’s. It was the church that marched arm in arm with civil rights leaders in the 50s and 60s. Flash forward to the decadence of the 80s. Televangelists and mega churches… all of a sudden with one of the largest platforms the church had ever obtained, she fell silent.

But one group in Christian music refused to remain silent on the issue. Releasing a track called “Walls” on their album Nu Thang, DC Talk jumped into peoples comfort zones and made some noise. On the follow up, Free At Last, they had an eighteen second long track 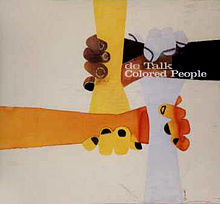 called “2 Honks & a Negro” … You read that correctly. Could you imagine if someone did that today? But on this disc was the title track that sampled Martin Luther King Jr. and it exposed many of us teenagers in the church to a voice we weren’t as familiar with. It caused me to explore his words and speeches further and I was then enlightened to what had caused so many in the black community to feel what they did when things like Rodney King Jr. occurred. So flash forward a couple of years.

1995…race tensions had seemed to calm down. Grunge had gripped the music scene but played alongside of Snoop Dog. You could go to Lollapalooza and catch Cypress Hill alongside The Smashing Pumpkins. There couldn’t be any issues with race at that time, right? We had put all of that behind us. So why, in 1995, did DC Talk release a song called

“Colored People” on Jesus Freak? The lyrics spoke of racial equality and all being made by the same God with a creative streak. They spoke of color only being the design of an artist with a desire to see his creation live in harmony. The song also ensured that I would always know words like epidermis and melanin. I recently saw a comment on Twitter about this song and the author stated that a song of this nature with this title would not be ok in this day and age. I propose that he was dead wrong.

Go back through this blog and every time you see the numbers 1992 and 1995 replace them with 2012 and 2015 or April 4th 1968 and ask yourself what is different? Have we really changed? Have we really reached that Mountaintop that Dr. King spoke of so passionately on the eve of his assassination? If we are honest the answer is no. And the scariest change in all of this is that the church has only grown quieter. No cries for justice, or equality, or pastors marching arm in arm with their brothers demanding basic human civilities. And there are no songs from the Christian artists causing young people to see that God loves all skin tones and that although we’ve all made mistakes throughout our history we are all just people, regardless of color, that need the grace of a masterful artist. Songs that declare to obtain that illusive mountaintop we must operate out of repentance towards one another.

So to that Twitter poster and to all of us I would say the following, not only is Colored People relevant, but we need a hundred more songs, poems, artworks and the like that state emphatically that we are all human after all.

As an added bonus, here’s a live performance of Colored People at the GMA Dove Awards