Abandon Kansas releases their third full length record on May 12th entitled “alligator“. This is the band’s debut on their new label “BadChristian”. I recently spoke with vocalist Jeremy Spring about the upcoming record, the band’s time in Gotee Records, and the importance of connecting with fans at live shows.

Gabe: You guys have a new record coming out May 12th called alligator. What can you tell us about the new record?

Jeremy: This is our third full length record as a band. The last one was in 2011 on Gotee Records. Since then, we’ve parted ways with the label and teamed up with BadChristian. It (BadChristian) is not really a label, it’s more of a co-op. It’s a group of talented musicians and artists getting together and helping each other push through this new kind of music business. So we’re excited about that relationship, putting out alligator with them. Actually, the fans are really the label. They paid for it through our indiegogo campaign…so the fans funded the record. We just actually emailed the record out to the fans who backed the album.

Gabe: Does it sound more like older Abandon Kansas or is it something completely new?

Jeremy: Definitely different. Track 1 has Shane Ochsner from the band Everything in Slow Motion. I love his screams and we decided to collaborate for our first track. There’s another track on the album that’s kinda like a duet…and it has an 80’s R&B thing. It’s a very diverse album! It’s more of a story, but not exactly a concept album. But it definitely flows like a movie. It has very different themes and chapters. It’s pretty dynamic! I’d say it’s a lot like old Abandon Kansas in the way that we’re doing what we want…it’s from the gut and it’s really honest. But it definitely sounds different as far as the music is concerned. 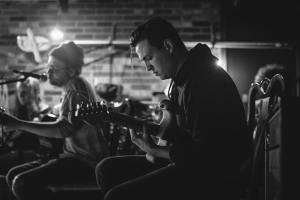 Gabe: What have radio stations like RadioU meant to Abandon Kansas?

Jeremy: RadioU’s been great! Gotee was the one’s who introduced us to RadioU. They pitched our very first EP to them and I think they initially passed on it! But they definitely came on board later. They played the Close Your Eyes video and people started gravitating towards the mullet I had (laughs). Since then, RadioU has been so good to us. Every time we come through Columbus, we see them and eat with them. They come out to the show and fill our van with gas. If we need a hotel room, they’ll get one for us. They’re just so supportive. They are listener supported…and they promise to help support bands like us and they actually follow through with that…it’s great! They watch out for the little guy!

Gabe: What was it like being a new band getting signed onto Gotee Records?

Jeremy: We were super excited! We were on the same label with Relient K, a band I skipped school for to buy their new album. Mark Townsend was producing our first few albums. I was really stoked. But it went from really exciting to really confusing…and really learning a lot. Some good and some bad. After 3 or 4 years working together, we just kinda called it quits. It was an even split. It stopped making sense with what we wanted to do creatively. We just had different visions. The label was wanting us to crank out a few more songs that they could use for Christian radio. So we were really forcing it and it was just getting uncomfortable.

But I think the difference is: we’ve seen a lot of bands in our situation leave a label and then make an album on their own…and then that album really sucks. It just falls short. They’ll record it with a buddy in the basement. They’ll tell their fans they are doing a new record but they actually bought a studio with gear and did it themselves. I’m so proud of the production on alligator. As much as I love and respect Mark Townsend, this new stuff is what we’ve been trying to fish out for a long time. It feels like a band! It sounds like a band in a room playing. It doesn’t sound suspiciously perfect.

Jeremy: Yeah! The only thing I went crazy with is the vocals. There’s a lot of voices in the head of the characters so there is a lot of vocal stuff. It’s kinda theatrical in that way.

Gabe: You did say you were on BadChristian. What’s the biggest difference between BadChristian and Gotee Records.

Jeremy: I’d say the built in core fanbase. Gotee’s reach was TobyMac and company….which isn’t really our flavor…I’m not trying to be mean or anything but it’s just not the same music we make.

Gabe: It’s not your genre.

Jeremy: Yeah! And we were falling on deaf ears. It just felt like our music went in one ear and out the other. The people there just didn’t get it. It wasn’t happy enough. It wasn’t catchy enough. Honestly, it just wasn’t simple enough. So we found a home with some guys that are making more artsy stuff. I’m pretty stoked because I grew up listening to Emery. Those were some of the first concerts I went to, screaming those lyrics. So to get to work with them has been awesome! We’re building a good team at BadChristian. So, I’d say the biggest difference is vision. They really want us to do our art. They don’t have a single word to come against us when it comes to our art or the lyrics or the music or anything. I’m 7 or 8 years into this band and I’ve never had that kind of freedom along with a great experience at the same time. So all that at once…I’m so stoked to launch this record! I’m pretty fired up here, I don’t know if you can tell (laughs).

Gabe: It’s sad though! You get into music because you want to express yourself artistically. And then when you finally catch a break, they try to water you down. I just don’t understand that.

Jeremy: I don’t get it either man! Me and you both! What do they love so much about an artist…they think their business-minded ideas can fix it. Why don’t they just trust the artist? Not necessarily to make business decisions but to make the art. And if it sucks, then it sucks. But if it sucks, don’t sign them! I just don’t understand… if a label can’t trust the artist to make the art then don’t sign them. To me, it’s as simple as that. It would cut the fat. Half the bands would be dropped that the label doesn’t trust. And then we’d just have good bands…we’d be back in the 60’s and 70’s. It’d be great.

Gabe: Do you have any plans to tour after the record is released? 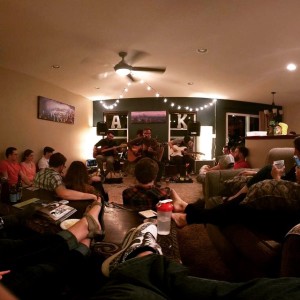 Jeremy: We’re on the Living Room Tour 6 right now. And there’s 46 stops…so it’s pretty brutal. But we’ve been playing in fan’s living rooms with about 30-40 people. Sometimes there’s only 15. Last night, there was about 70. It’s different every night. We have the new record with us right now so we’ve been handing it out to all our core fans. I think we’re gonna hit the road again but with full band, regular style with full electric set, in the summer. I’m guessing at some point we’ll do dates with some of the BadChristian artists. So I’m sure there will be some tours heading out soon.

Gabe: Yeah, I’m friends with a guy in the band OceanSpeak. I guess you played a show with them not too long ago.

Jeremy: Yeah, we played their release party up in Columbus!

Gabe: Yeah! And he was really stoked about having you guys on that bill. I know that meant a lot to those guys. One thing he mentioned was you guys play a great live show. What’s the importance of that to a band like Abandon Kansas?

Jeremy: Dude, band’s spend so much time on photo-shoots and their haircuts and their wide-brimmed black hats. And tracking down Instagram followers. We just put so much emphasis on the actual music part. And if you talk to bands now, so little of it has to do with the music anymore. It’s really frustrating! I’m not saying it doesn’t exist…but it’s way less than it used to be. People are getting into bands for the wrong reasons now. But we spend a lot of time practicing and jamming. We talk about the set a lot. We’re really passionate about that part of the show because that’s our part of it. And I feel like when we raise the show to that level, people meet us there. They listen and pay attention. That’s always been important to Abandon Kansas. The last thing we want to hear is, “They had an awesome CD but they just fell short live.” We want people to say, “We love the CD but the live show is just wow!” We definitely put a lot of energy and passion into the live show.

Gabe: And that live show is where you make that connection with fans. It’s one thing to buy a record but it’s another to drive 2 or 3 hours to see a show. For me anyway, I’ve never gotten hooked on to a band until I see them live. Maybe that’s just me…

Jeremy: It’s not just you! I think listening to art can be intimate especially if you’re alone. But I think if you’re there at the show and the artist is exposing themselves in a way that is connecting with you…and the people that wrote the song are right there in the room with you. It doesn’t matter how big or small the artist is…if the art connected, there’s something really cool that happens in the room. I fully believe in that. That’s why I’ve given so much time to travel around the country and play. Concerts can be life-changing for people. That’s the incredibly humbling part of it! I go to so many concerts and it affects me. It affects the way I make decisions the next day. It affects my life. To be able to throw concerts like that with this band, I take that really seriously.

Be sure to catch the upcoming release from Abandon Kansas on May 12th alligator. And be sure to follow them on Twitter: @AbandonKansas